Happy Wednesday night, to you all…

It is that time of the week, again, when I just wait for the sun to set, to see what will happen on the other side of the street. I have skipped a couple of weeks, and you probably thought I was just bored with this (alledged) serial killer neighbours thing? That’s not knowing me too well! I’m a little disappointed.

How could I lose interest in something that’s been making me look forward to Wednesdays for well over a year now??

No, no, no… I was just being strategic (again) and luring my silly neighbours into thinking that I didn’t give a dang anymore. I must say, they were pretty discreet for two weeks, but when I walked down the steps with our two bags (yes, I’m still splitting our trash into two bags, to try to intimidate them), I squealed! 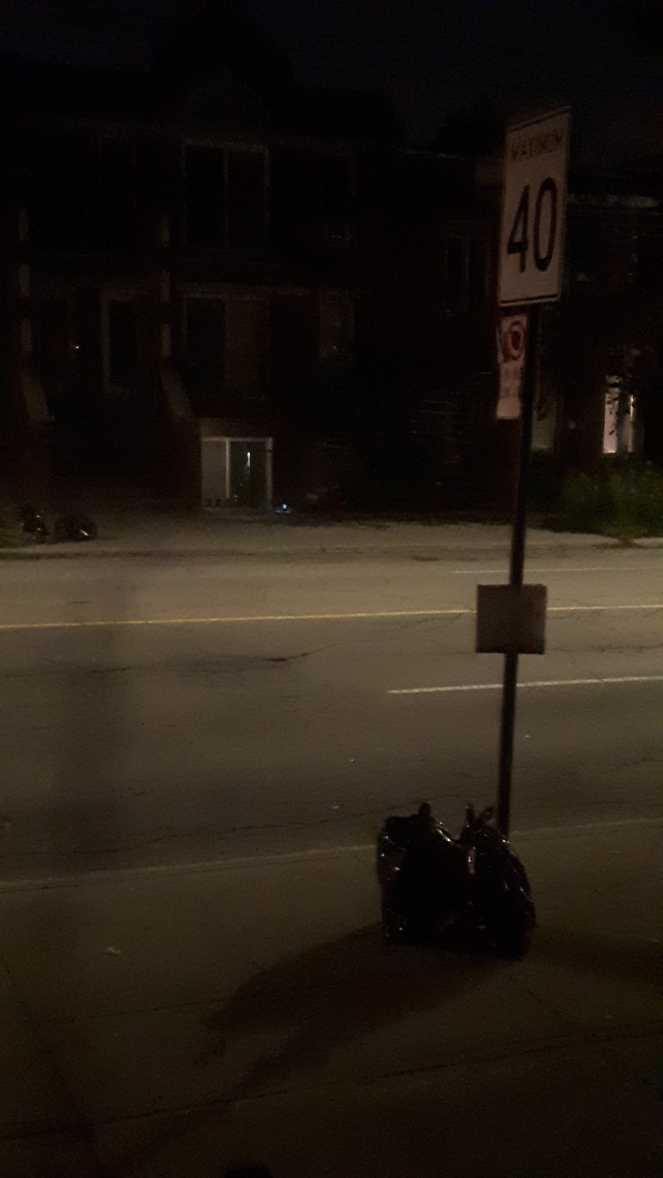 Ok, wrong picture, those are our bags.

By the way, I want to appologize for the poor quality of my pictures tonight. In order not to end up in one of the black plastic bags myself, I’ve decided not to point my cell phone at my neighbours’ building in broad daylight.  So, until I get a newer and more fancy phone, you’ll have to accept a little blurriness. But I promise to do my best!

Right, so why did I squeal, uh?

Well well well, it so happens that when you do cut (alledged) vicious killers some slack, they eventually start to lower their guard.

Just take a look at this!

Now, if that’s not a shitload of trash, I don’t know what would be!! I mean, just to clear out things for those of you who haven’t been following my (alledged) serial killer neighbours spying, this is the work of only two apartments… Holy molly, right??

A friend of mine suggested that they might not actually be killers, but maybe they had something to do with human trafficking. And that maybe they were hiding dozens of people in their two flats (she actually said that there could be something like 50 people in there… Yeah, she’s being a little over dramatic!)

I wonder what worries me the most.

I must say, I was almost getting used to living so close to (alledged) serial killers.

I guess we’ll see what happens, next! Wish me luck, hehehehehe.

4 thoughts on “When you cut them some slack…”