It is my fifth week, competing against Trina in her Where in the World Challenge. We started with the United States, then South America, Central America and last week was about Western Europe.

What we do is list the different states/countries, and then place them on a blank map. And seriously, it sounds easier than it really is. You can join in, if you’d like! Here’s the link to Trina’s previous posts. You can do the past challenges, or start with next week’s area (I believe we’ll be doing Northern Africa next weekend). Just make sure to link Trina into your post, so we know that you played along.

I want to send my most sincere appologies to all of my Eastern Europe friends and readers… In all honesty, I knew I wouldn’t nail the area, but I didn’t realize how little I knew about it. It is embarassing, and I almost found myself an lame excuse to skip this week’s challenge (that wouldn’t have been hard, since yesterday Druk, the Danish movie I’ve been annoying you with for weeks, if not months, has won the Oscar for Best International Feature!) But I won’t do it, and I’ll try my best to limit the damages.

What really bothers me about being so ignorant about Eastern Europe, is that I’ve had visits from everyone of the 22 countries, except for one. For some reason, if it was an area that has never shown interest for The Cove, I’d feel better. So, again… I am really sorry for messing up your part of the world, lovely people!

First of all, listing the 22 countries (Man… this hurts!).

As you might have guessed, I did remember that one country that never read my blog. That’s Kosovo. I know Albania (I virtually got sent there a couple of times – long story, don’t ask), one of the blogging ladies I follow adopted kids in Latvia. There’s also Polland, Ukraine (today’s the 35th sad anniversary of the events in Chernobyl – by the way), Romania, Hungary, Turkey, Bosnia & Herzegovina, and Slovania.Oh, and Russia, of course!

11 out of 22… Not my best take on the challenge, to say the least. And just as I was about to give up, I remembered Macedonia, though I am not absolutely sure that it actually is on the list.

I have to thank Trina for giving me a couple of clues… Otherwise, I would have brought eternal shame on myself.

So I got half of them, given that I haven’t moved any Asian country to my map. Which (Pfewww) I apparently didn’t.

Shall we check where I would put the puzzle pieces? (you don’t have much of a choice, anyway) 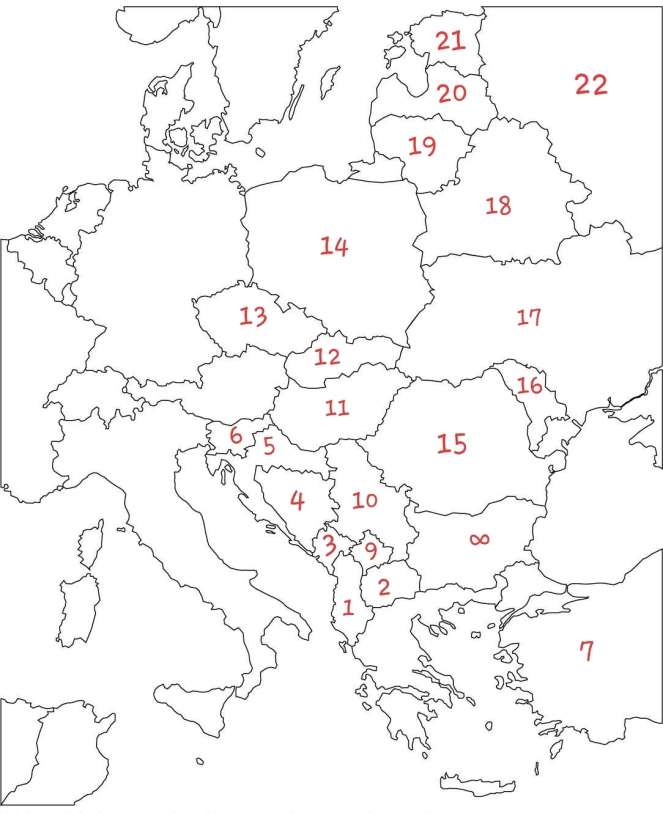 To say that I guessed most of the above would be an understatement. So you can guess how surprised I was to see that I had 13 out of the 22 puzzle pieces in the right place… Whuuuut??

I still appologize for the other nine countries, though!

Do you think you could have done better? (Probably) Join in next week for Northern Africa. If you’d like to see the map of countries we’ll be trying to remember, check Trina’s post here.