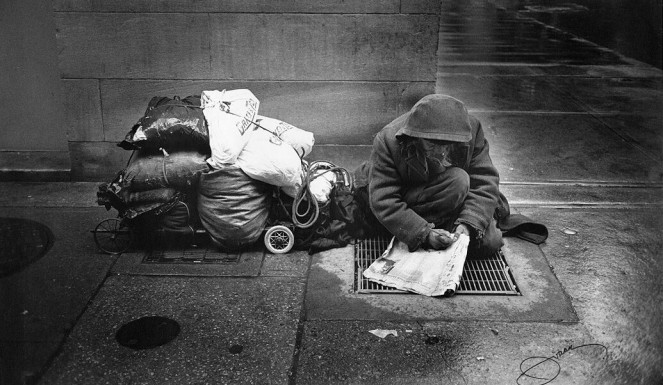 Not long ago, I wrote about a homeless man I met during Montréal’s Film Festival… John

To be very honest, I almost deleted my post just before hitting the “publish” key. I was afraid the story would give the idea that I was bragging about being nice to the homeless. It wasn’t my intention, I had just been so touched by my encounter with John, that I needed to talk about it.

The post was ready, I was still moved, and I decided to go ahead and send it out…  Thank God! Here is the comment I received from a friend of mine, after she read my post.

“Your post has hit very close to home. My father was homeless and lived on the streets in Edmonton on more occasions than I care to admit. Although I tried several times to help him, I was not only fighting against the system but I was also fighting against a very powerful force, his paranoid schizophrenia. All too often, those suffering with mental illness slip between the cracks of the Mental Health Act and society’s stigma about mental illness; consequently, they end up living on the streets.

It brings me great comfort knowing that there are angels out there like you and the man who bought John lunch. Through your simple acts of kindness, both of you treated John with the dignity and respect he so richly deserved. Thank you for that.

I can only hope that during my father’s experiences of living on the street, he too was treated with dignity and respect by angels like you and that other man who truly walk among us.”

I am tearing up again, reading those words…

I was totally unaware of this chapter of her life, and it made us both very emotional about the subject.

Too often, I think we all look at the homeless as if they were lonely people, that just won’t fit in our society. We (and I include myself, because I don’t always have time or intention to stop and at least have a chat like that day I met John) overlook them while walking down the streets, and they look like forgotten souls…

But they’re not all forgotten. A lot of them have families, out there, in the normal world. We could think “why in Hell don’t they come, pick them up from the sidewalk, and take care of them?” right??

But my friend confirmed what I suspected already… Although I wouldn’t want to generalize, homeless people often just slip through society’s nets. No matter how much you want to help a loved one, sometimes, you just can’t keep them from making bad decisions, and going the wrong path.

I feel for those families and friends who suffer from not being able to put their son, brother or father back on track… It must be so frustrating to see someone you love deeply put him/herself in danger and beg for a living, while he/she could be sharing a more comfortable life with them.

How heartwrenching that must feel….

Dear friend, daughter of one of all the John Does out there, thank you! Thank you for opening up on what must have been an extremely painful part of your life. I can only try to imagine the sadness, the frustration, even the shame involved in having to accept what you couldn’t change.

I am sure some people took a moment to care about your father along his journey on the streets… Not enough, obviously, but I hope he came across kind people every now and then!

I don’t always stop to help people who beg on the sidewalk, downtown Montréal. But when I have time, I do take a moment to go to the nearest convenience or grocery store, and get something to eat if the person is hungry.

From now on, I promise to at least make eye contact, smile and wish a nice day to homeless people I go by. Each time, I’ll have a thought for your late father, whose life was worth aknowleging, even in his darkest days…

Hugs and kisses my lovely… And thank you once more for opening your heart!