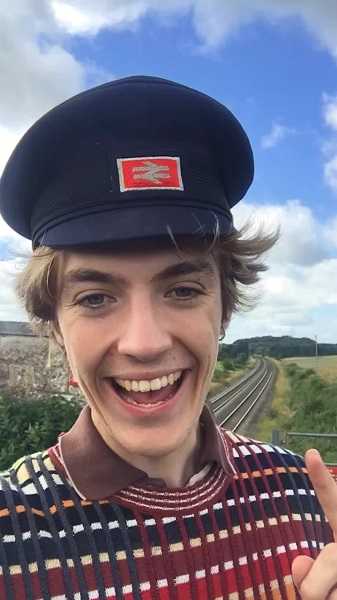 Is it just me or as we start adulting, it is socially requested that we start hiding any sign of unexplainable, and profound passion for something that other people just don’t care all that much about?

I love being passionated about something.

It gives me a natural high, probably better than any drug (and most certainly less illegal too). Anyone who’ve bravely engaged into a serious conversation with me about Denmark, knows how my eyes sparkle at the sound of any word containing an ”å” or an ”ø”.

When it is occasional, people think it is somewhat endearing. But in the long run, I can divide people into two groups:

Which brings me to the actual reason of this post.

On my way down the bottomless rabbit hole that is TikTok, I found Francis Bourgeois, a twenty-something years old young man living in the U.K. (see above picture). Francis loves trains with a passion… He records all of his trainspotting experiences on his account.

I like trains, no more no less than the average. But after watching him weep at the sight of a specific locomotive on its last trip to the junkyard, or crying with joy as a friend train driver honked some seventy some times as it passed under the bridge where Francis was standing, I fell in love with the Train Guy.

The (not so) funny thing is, that after attending a music festival, a tsunami of people started spreading the rumor that Francis’ Train Guy passion was a thing he made up, to get millions of views. As if, because he had a normal life, his passion was staged. I might be wrong, I often am, but I do believe in Francis’ passion.

And I love it.

I think we should all allow ourself to express our own passions as he does.

If you love something that others don’t care about, I’m with you. Big time!

And if you have any connexion with Denmark, let the Queen know that I’m her country’s biggest fan. I could definately live with being the Denmark Gal, worldwide. *Wink wink*

4 thoughts on “The Train Guy…”