Earlier today, I saw on the news, that a car had run into a crowd in Boston, leaving many people injured. Since, the police has announced that it was most likely not intentional, but it inspired me anyway. 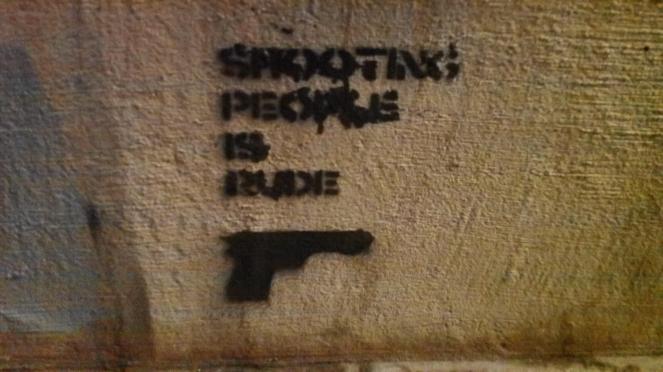 Seen in a Chicago subway, some years ago…

Because, let’s face it. People have always been good at hurting each other, but the last few years, things have been out of control.

Most of the time, people do bad things because of ignorance, so I decided to make a not-to-do list for people who would consider doing any of the below stuff. The WordPress community is pretty peaceful, but you never know, I just might reach one doubting soul, and prevent a few people from getting hurt for no reason.

-Driving car (or truck) over people. Not nice!

-Wrapping explosive stuff to yourself and blowing yourself up. Not nice, either for people around you, and/or for you!

-Putting up a bomb in your basement, and leaving it to blow up where others spend some innocent time. I can provide many other DIY videos far less hurtful, that can help kill time. (P.S. killing time is not a crime!)

-Shooting people with guns. Definately not nice… And although some people might have given the idea that it was cool, I’d like to point out that it is particularly not nice to shoot guns in schools, churches, clubs, bars, show rooms and sports’ stadiums. Shooting stones is not cool either, even if it hurts less!

-Beheading people…. Yeah, big NO! (also seems a lot of work… With the cleaning and all… but that’s probably just “lazy me” talking)

-Hanging… Ok, I heard “not cool!” in the back. You’re getting my point, right?

There is so much more that comes to my mind, but I just wanted to cover the most intense cases. If you are thinking about doing something that might hurt another person, and are not quite sure if it is cool or not, just write to me in the comments, or in private. I’ll discuss the matter with you with pleasure.

The best clue I can give you is “when in doubt, don’t do it!”

One thought on “Simple tips.”