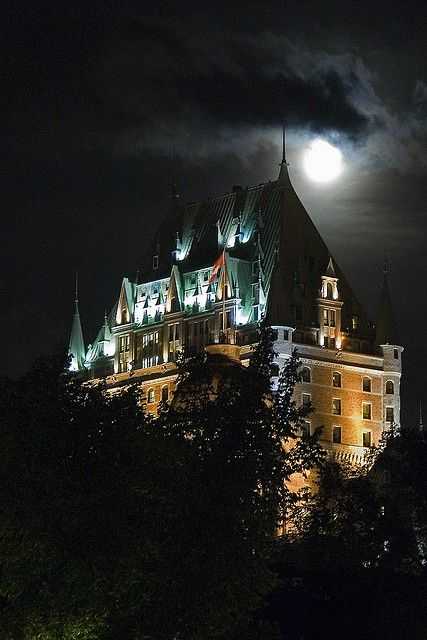 After driving for a little over three hours, he finally pulled up near Château Frontenac. He knew the capital’s old town was pretty much free from tourists, but he hadn’t expected to find a parking spot so easily.

The moon was high and full, over the castle. He stood for a moment, considering which way to go. Reaching inside the car, he grabbed his katana, locked the door and started walking.

If only people knew… But how could they suspect anything? It was Halloween afterall, and his medieval costume didn’t make him stand out at all. He walked freely, only witness of the dark plans about to unfold.

Suddenly, the stranger’s silhouette turned the festive evening into a night of horrors. Swinging his long blade in the fall’s crips air, he hit a woman passing him by. The sabre cut deep in her flesh, blood spraying as she fell to the ground.

He didn’t know her, and only he understood why she had to die.

Not caring, he kept walking pointlessly, leaving a distressed husband trying to save his better half’s life.

Had he used a gun, the police forces would probably have caught him faster, but wrapped in the narrow streets’ darkness, he was quite stealthy, taking victim after victim by surprise. Blood dripped from his sword’s blade as he kept walking, spreading horror and death in the very heart of Québec City.

The rest of the evening was still a little blurry. But after a long walk towards the harbour, he started feeling uncomfortably cold. He probably had underestimated the temperature drop, or maybe he just hadn’t felt the chill because of the previous adrenaline boost.

He heard sirens from afar, and turned to see the police cars’ lights coming his way.

I wish I could say that this is a Halloween themed piece of fiction. Unfortunately, this is what happened in Québec City last night. We don’t have much details just yet, but a 24 year old man did go on a killing spree, dressed in medieval clothes. Using a Japanese katana sword, the man killed two people, and severely injured five others.

My thoughts are with the families of the seven victims, and the people of Québec City, one of the safest cities I know.