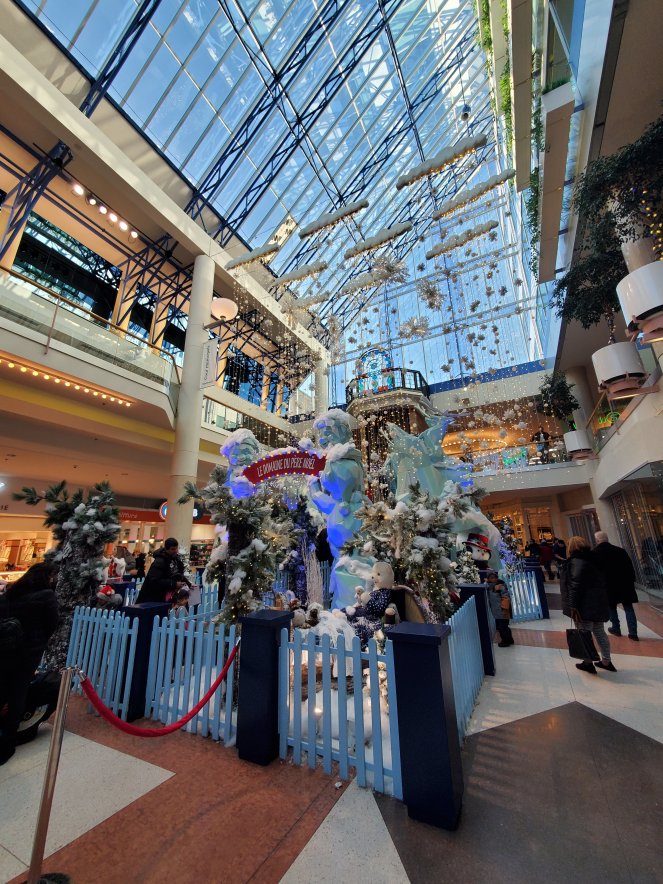 I know that our American friends have yet to celebrate Thanksgiving, but here in Freezingland, that’s been taken care of in october… So we’re now heading towards Christmas!

Some people have started decorating their homes (inside and out), and malls have already gone all-in (as seen above).

I don’t know how Christmas is celebrated in your corner of the world, but here, it is a tradition in most families, to take little children to the local mall to meet Santa and tell him about their Xmas gift wishlist.

I won’t lie to you, depending on the neighbourhood, Santa can seem more or less trustable, but children don’t seem to mind that.

When I was a little girl, Santa’s ”castle” was pretty open, and you could spot the bearded man from the other end of the mall.

Apparently, things have changed since. I shouldn’t be surprised, that was almost four decades ago.

Now, said ”castle” is built so that parents can’t take a picture of Santa if they don’t pay to have their kids actually meet Santa. I think that’s kind of sad. For one thing, I bet there are a bunch of families that just can’t afford that one on one meeting with Santa for their children. And though I grew out of actually believing in the old man (or did I?), I think that there are people like me who’d like to catch a glimpse of the bearded guy, for old memories’ sake.

Also, I heard today that this year, children wouldn’t be allowed to sit on Santa’s lap. They’ll have to sit on a bench by Santa’s throne, for sanitary reasons. Given that the last two years, they could only get online messages, that is an improvement. But still…

With that said, if you know me, you know I don’t bow down without a little fight. And today, when I walked around Santa’s ”castle”, I spotted a little crack.

And Chéri made my day when he told me that just after taking this picture, a mom noticed that I had found an angle to catch a glimpse of the ol’ guy. She took pictures too, with her little boy by her side.

I just hope I spared her a couple of bucks.

My Tweets
Join 3,441 other subscribers