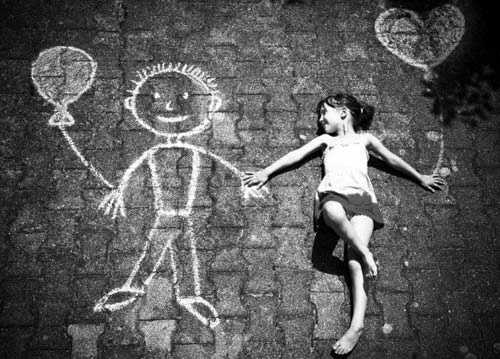 When the school bell rang, all of the children ran to the center of the playground.

Recess was over, and Sarah quietly made her way to her class’ queue, taking her usual place in the line. All she could think of, was that she was next to give her oral presentation. At least, it was the last of the year, and then she’s be free until next fall.

And that was far, faraway in the future.

I wonder what she’ll come up with… Everybody knows that she doesn’t have friends!

It wasn’t the whisper that had hurt her the most. But the mean giggles that followed made her bite her lip as strong as was able to. She could have waved at the teacher supervising the ballet of kids re-entering the school.

But she didn’t need the extra attention.

Once back at her desk, she quickly reviewed her scarce notes. Her little fingers were trembling on the paper sheet, when Miss Kelly called her to the front of the class.

The little girl walked clumsily to the blackboard, and stared at the other kids for a moment. Gathering all her courage, she started.

My bestfriend is called Lew. I’ve known Lew since I was about four years old, and we’ve been friends since the very first time he showed up at hour house. Lew is kind and funny. He never makes fun of me and he knows all my secrets. He always listens to me. He never judges me. He doesn’t give me expensive things, but I don’t need gifts to like him.

And I know that he doesn’t really exist, but I wouldn’t trade him with any of your bestfriends…

With that said, Sarah walked back to her seat, all smiles.