Just so you Lovelies know, I’m still trying to keep a low profile and so far, it’s been paying off. I am still alive and unharmed, which, let’s face it, it a pretty dang good thing when you live so close to dangerous people!

But just to be on the safe side, I decided to crawl on the balcony and take this week’s picture from behind my cantaloup plant. Last week, some of you had pointed out that my green onions weren’t offering me a great camouflage. And I appreciate your concern. The cantaloup plant has large leaves, so I thought that was a better hideout.

As you can see in the above picture, my (alleged) serial killer neighbours still have doubts that someone (me) is spying on them, because they have (more or less cleverly) switched spots… Again! No way is it even possible that the people in the left-side building have only two bags of trash. The same way, the right-side building couldn’t gather six bags of garbage in just one week.

I was peaking through the leaves, when something else happened.

Two of my other neighbours (these two live on the same side of the street as we do), came strolling down the sidewalk. And I knew very, very well what they were up to. 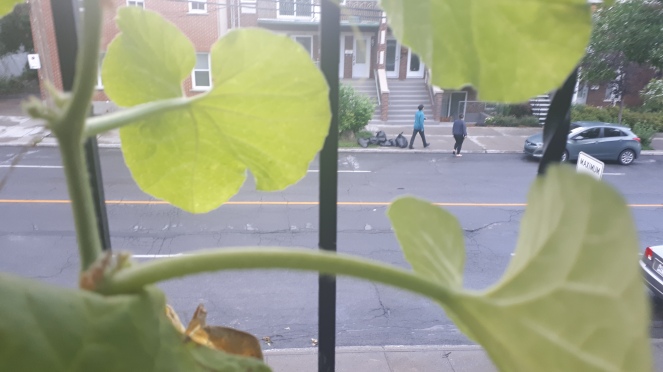 I have a bone to pick with this seemingly nice couple. And why is that? you’re probably wondering.

Well… Let’s try to make a long (almost a year and a half long, actually) story short. Here in Québec, in March of 2020, the governement has forced all businesses that could send their employees back home to work, to do so. And I soon understood that these love birds were in the same situation as Chéri and I. ”Stuck” home 24/7. And how did I find that out?

Easy. Chéri was lucky enough to get a permanent parking spot in my job building’s parking lot, since nobody but security guards were going there anymore. But this couple had to keep parking on the streets, and we have hours you just can’t leave your car in specific spots, so they had to move said car, twice a day, for the last 16 months.

I wouldn’t have noticed this, if their vehicule didn’t have a very loose strap that makes an incredibly annoying screeching noise everytime they start it.

At first, I was very understanding. I mean, we were going through a very tight lockdown, in the winter, and I felt for them. I remember thinking that I wouldn’t want to go to a garage either, so I just endured the nuisance (almost) quietly.

Then summer came, and rules loosened up, and the screeching kept happening (at least) twice a day. That’s when I Chéri started giving me a grin everytime they moved the car, because he knew just how annoyed I was. I even considered sticking a check under one of their windshield wipers along with a note that would have said something like This should be enough to fix your f*ckin’ car!

I didn’t do it, even if I was very tempted. And then winter came again, and the third wave was just so bad that I found myself much more indulgent again.

And their car hasn’t been fixed, yet. And when I saw them walking on the sidewalk, I thought it was the perfect time to catch evidence of their lack of consideration for the whole neighbourhood. In the video, the screeching starts about halfway through, and you can see the little black car driving by in the last couple of seconds.

But back to the serial killers for a minute…

Since I had rushed to my green onions’ spot for the video, I thought I might aswell catch a clearer shot of the garbage, just so you couldn’t say I was cheating by covering some of the bags by using the cantaloup leaves.

As I was about to walk back inside when I spotted something new.

Something that worried me greatly.

The stump on our side of the street has suddenly started growing new branches….

And I certainly have nothing to do with it!

So I am wondering if the serial killer neighbours have started crossing the street to do this, as a sign they are getting closer, OR, if they now have allies on MY side of the road.

One way or the other, this feels like a threat.

I guess only time will tell…

6 thoughts on “The evidence is piling up…”