It is my fourth week, competing against Trina in her Where in the World Challenge. We started with the United States, then South America and last week was about Central America.

What we do is list the different states/countries, and then place them on a blank map. And seriously, it sounds easier than it really is. You can join in, if you’d like! Here’s the link to Trina’s previous posts. You can do the past challenges, or start with next week’s area (I believe we’ll be doing Eastern Europe next weekend). Just make sure to link Trina into your post, so we know that you played along.

This weekend was about Western Europe.

I had a good feeling, because I’ve traveled to Europe a fair number of times.

And I was right. It took me longer to prepare the map, then to actually list the countries and place them where they were supposed to be. With one exception… Here it is: 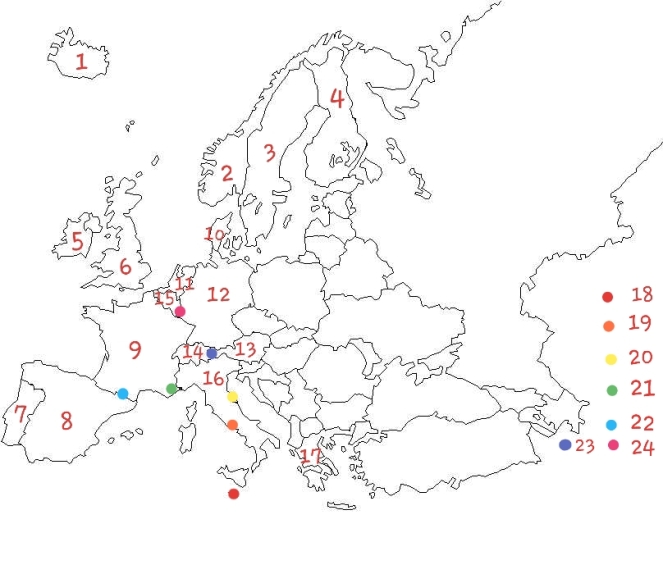 After checking a map, I learnt that The Internets consider #20 to be San Marino… But I’ve never heard about it, and it has never visited The Cove in my five and a half years of blogging. So I decided that it was Vatican II instead. You know, like a backup plan, just in case something dramatic happened to the Vatican. And they were clever, when they planned this. They chose a slightly bigger piece of land (probably because they quickly realized that the Vatican was a tid bit too small – if they were to move, all the better moving in a more spacious space!), far enough so people wouldn’t link in the two sites, but close enough not to have to worry about moving there, eventually.

You might disagree, but I still think there something weird happening in Italy.

Other than that, I am sorry for my good knowledge of Western Europe. Ignorance is much funnier!

But worry not. Next week, Eastern Europe is going to give me a lot of trouble. And putting it back together is probably going to be worth a good giggle!

8 thoughts on “It’s your time Europe!”