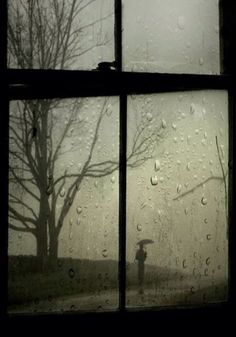 The thunder woke her up, way before the alarm clock would have. The window was still shaking when she opened her eyes on the new day.

Another flash of light forced her eyelids closed, and the skies roared again. She rolled in bed, covering her head with the sheets, wipping tears from her sleepy eyes.

She amost wished her nights would be filled with nightmares. Instead of that, her head was replaying her favorite memories in a loop, giving her a fake feeling of hope until she emerged from dreamland, lost and broken again.

And again… And again. Morning after morning. Dawn after dawn. Daybreak broke her, and left her like a ragdoll lying in the rippled bedsheets. She never thought she could hurt so much that her body would weep while she slept. But she did. No wonder why she felt so exhausted and empty the minute she stepped out of bed.

But life went on.

Guilt had become a second nature along the weeks, and mourning in silence seemed a better punishment than giving up on her own life. She deserved to hurt. And at least, that way, she kept feeling something.

Funny, she thought, how the raging elements didn’t scare her the least bit. She felt somewhat comfortable in the eye of the storm, because it was the exact replica of the turmoil that shook her from within. Same violence in and out.

The clock reminded her that she had to prepare for her daily performance. It was time to put on her mask, paint a smile on her lips, and face the world. It was sickening to think about the whinning she was about to endure, but she couldn’t blame others for the nausea effect they had on her.

She had decided not to share her pain. And she lived well with it. Nobody was worthy of seeing the broken pieces of her heart. And she wouldn’t allow anybody to try to mend it.

Above all, she would never let a soul compare her despair to any other’s.

Another day, just time passing by. Minutes adding into hours, and days… Patiently waiting for her last breath to come.